IN THIS NEWS BLOG, THERE IS PLENTY OF INTERESTING ARTICLES TO BROWSE THROUGH.

Alan Pembroke has been appointed as an administrator of the site and can download anything to the site including news, photo's and new pages as he deems necessary.

Another Trafalgar Day lunch has come and gone having been held at the Durban Country Club yet again. Numbers have dwindled which is a shame and a few shipmates overcome from a hearty feast couldn't keep their eyes open during the speach presented by Allan Pembroke our Chairman.

It is with sadness the branch bids farewell to Bobby (Wife of S/M Vic Atherton) as she crossed the bar tonight around 5pm. Arrangements will be broadcasted. Our prayers are with Vic and family

Knapps reflect on 65 years of marriage

On their 60th wedding anniversary in 2010, the couple received a letter from Queen Elizabeth.

The couple met in England when Norris was 18 and Gladys 17.

“My parents were out of the house the day Gladys and I met. I saw her sitting in the cinema and knew she was the one,” said Norris. Norris (85) is from Victoria, Australia and Gladys (84) was born in the UK.

Thinking back on the day they met, Gladys said: “He came up to me and said ‘I’ll see you round the back.’ The Knapps married on 14 January, 1950 in Stanmore, England and moved to South Africa in October 1976. They have been residents of Montclair for 20 years.

Norris had a career in the navy and went on to do engineering, while Gladys was a dress machinist and later quality control. The Knapps are a family of seamen – their children Paul and Susan are former Royal Navy.

On their 60th wedding anniversary in 2010, the couple received a letter from Queen Elizabeth. “That was quite a surprise,” said Gladys.

Reflecting on 65 years of marriage the couple say the secret to a long marriage is patience, especially when you get older. “My mother used to say never go to bed after an argument,” he said. Gladys enjoys ‘crafty ladies’ on Tuesdays at Woodlands Bowling Club while Norris is a member of Durban Wanderers Bowling Club and enjoys reading. They also have three great grandchildren.

Although a small turn out of only twenty including wives, partners and guest, we were well received at the Durban Country Club and treated to another splendid meal.

Claudette Picot wife of S?M Denis Picot past away on 3rd September 2015 at 21h00 after her main organs collapsed.

Claudette had been through a lot of illness and injuries over the past few years but was just comming right and walking without her walker.

Our thought and Prayers go out to Denis and family.

Funeral arrangements will be announced soon

"We People of South Africa; Recognize the injustices of the past; Honour those who suffered for justice and freedom in our land; Respect those who have worked to build and develop our country."

That we, the Military Veterans who stood against each other in the divide between the forces that meant to liberate our country and those who sought to maintain the past that our society did not need nor deserve, now stand united in reconciling and building the nation, to bring about social cohesion, unity and to work together to build a better life for all.

Recognizing that, despite the many achievements made since the advent of democracy in our country, on 27th April 1994, many Military Veterans still live under conditions of abject poverty, unemployment and inequality and many still carry the scars from the conflict of the past.

-  We therefore commit to work together as the new umbrella Association, established in accordance with the Military Veterans Act 18 of 2011.

-  We commit to work in close partnership with the Department of Military Veterans, the government as a whole, and all sectors of society.

-  We further commit to ensure that the umbrella association, that we declare as the South African National Military Veterans’ Association (SANMVA), shall conduct its business, in a fair, transparent, accountable and inclusive manner.

The SANMVA shall lawfully represent the interests of Military Veterans.

The SANMVA shall hold free, fair and regular elections, and at least once a year it shall report to the Minister of Defence and Military Veterans.

-  We further commit that SANMVA shall account to its member constituencies.

-  We, as delegates and members of SANMVA having resolved to dissolve the SANMVA that was established at Booysens Hotel on the 28 September 2008, under the repealed Military Affairs Act of 1999, have resolved to reconstitute and establish a new SANMVA in line with the Military Veterans’ Act 18 of 2011 together resolve to:

o    Adopt the Constitution of SANMVA as discussed, amended and adopted by Conference held in Birchwood Conference Centre on 29th September to 2nd October 2013.

o    Consistently advocate for the resolution of socio-economic and political needs and interests of all Military Veterans.

o    Ensure memorialization and honoring of all deserving Military Veterans.

o    Ensure the acceleration of the delivery of all benefits stipulated in Section 5 of the Military Veterans’ Act 18 of 2011.

o    To provide support and advice to the Ministry and the Department of Military Veterans, to ensure the speedy establishment of the Advisory Council, and the Appeals Board.

o    To ensure the speedy development and completion of a credible database of Military Veterans.

o    Advocate for the compliance by relevant departments to the spirit and the letter of the Military Veterans’ Act 18 of 2011;

o    To enhance and support the capacitation of the Department of Military Veterans to execute its legislative mandate.

-  We resolve to mobilize all Military Veterans to work together to contribute towards deepening social transformation, building peace and stability as well as enhancing sustainable economic development.

-  We resolve to contribute towards the establishment of regional, continental and global co-operation of Military Veterans.

-  We, the delegates of this conference, therefore call on all the Military Veterans, business, labour, civil society, as well as the international Military Veterans’ community to work together with SANMVA for the realization of all these resolutions.

SANMVA National Office Bearers, as elected at the Birchwood Conference:

Did you know we also have a facebook page?

check it out and get involved

17 Shipmates and 5 visitors as per the Attendance Register.

The minutes were confirmed without amendment. Proposed S/M C. Whiteing and Seconded by S/M D.W. Picot.

the President S/M J.L. Holland was expressed amid applause from the Shipmates present for his kind generosity for hosting the Shipmates to a luncheon for so many years.

Correspondence was tabled by S/M Vic Atherton as follows:

b.   The periodical “Home Port” was received and noted with interest.

a.   Invitation dated 16th August 2013 for the Shipmates to attend the Annual Gunners Memorial at the Old Fort on Sunday, 8th September 2013 and for the Chairman to lay a wreath.

b.   Email from Ireland from S/M M. Jackson re- apologies for not being able to attend the Annual President’s Luncheon and expressing his and Julia’s good wishes to the President, S/M J. Holland for his birthday.

a.    Letter dated 2nd August 2013 to Mr H. Van Der kerk thanking him for the signwriting of the Honours Board.

operative procedure to be performed whilst he was in hospital.

b.    Letter dated 21st September 2013 to the President thanking him hosting the Annual President’s Luncheon.

The Treasurer reported as follows:

9.1    S/M Denis Picot reported that he would call on S/M Cliff Stilling the following week and he mentioned that although

S/M N. Knapp was not too well he was present at this meeting. He also said it was nice to see that S/M B. Sayer has

recovered well from her recent operation and stay in hospital.

9.2    S/M R. Creed gave an update on S/M C. Rennie’s health and in response S/M D.W. Picot undertook to make contact with S/M C. Rennies during the course of the next two weeks.

9.3    S/M J. Costley informed that S/M M. Jackson has serios back problems, which was why he was not present and further that S/M J. Jackson had fallen and broken her wrist whilst they were on holiday overseas.

9.4    The Chairman mentioned that S/M J. Mc Donnell had been mugged recently, but the circumstances were not clear.

10.1 S/M D.W. Picot expressed the view that the RNA Natal Branch Commemorative Function planned for the 15th October 2013 at 1730 was not a good time for a number of reasons, which was also supported by S/M P. Knapp who has had discussions with the Old Bill of the Shell Hole, C. Flutter. After various divergent views were expressed by the Shipmates it was unanimously agreed to cancel the function for 2013.

10.2 S/M P.  Knapp mentioned that he has received an email from S/M G. Langley who is in Russia and that he sends his best to the Shipmates.

10.2 S/M P. Knapp requested the Shipmates who were members of Assegai Club to pay their subscription which are

10.3 S/M P. Knapp informed that in the online issue of the RNA HQ Circular for September was a photograph of the

Shipmates to be upstanding and a minute’s silence were observed in memory of the Shipmate. The Chairman also

requested the contact details of S/M S. Porters family so as to convey the Shipmates’ belated condolences.

11.1     The Chairman informed that as per the RNA Natal Branch Events Calendar that the venue has been booked by the

President. Also the Shipmates were requested to indicate on the list being circulated whether they would be

attending or not. The Chairman said that the cost for the luncheon should not exceed R180 to R200 per person and

both he and the Chairman would negotiate the best possible deal with the Club Management. Therefore it was

with medals and the Shipmates not present at the Regular Meeting would be contacted by the Secretary.

Shipmates were requested to RSVP/confirm  to the Secretary by no later than 14th October 2013 whether they   will be attending the function.

12.1 S/M D. Picot mentioned that in discussion with the Old Bill, C. Flutter during the course of the week that the Shell Hole wondered whether the RNA could assist in their building fund by donating R10 000.00.

12.2 S/M B. Sayer informed that they were no longer on email and requested that correspondence be mailed to her in future.

12.3  S/M G. Knapp proposed a vote of thanks to the Shipmates for setting out the chairs for the meeting.

13.4     The Shipmates duly appointed by the “Master at Arms” to propose the “Loyal Toasts” in the following

CROSSING OF THE BAR - ELIZABETH HOLLAND 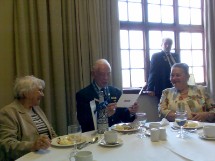 It is with saddened heart that I have to inform you of the passing of our President’s wife Elizabeth today.

I am sure all of you are aware that Elizabeth has been in poor health for some time now, although she did not outwardly show it. Elizabeth bore her illness with much strength and courage and unfortunately she succumbed to the disease this morning at 1100 after having radiation treatment.
The Memorial Service for Elizabeth will be as follows:
Date: Thursday, 18th April 2013
Time: 1100
Venue: St Olav’s Church in St Thomas’ Road, Durban (Almost opposite Garden Grove Retirement Centre) between Musgrave Road and Essenwood Road
Dress: Formal Rig i.e.  White long sleeve shirt, RNA tie, grey/dark trousers, black waist belt, navy blue/black blazer (RNA blazer badge), black shoes & black socks, RNA lapel badge (on left Blazer lapel), white ensign, veterans badge and nameplate(on right Blazer lapel) and Medals on left breast.
Shipmates, if you know of any Shipmates not on email, please will you pass this signal onto them.
Let us support our Shipmate President in this his hour of need.

Start a Free Blog at Webs.com